Huế is already one of the greenest cities in Vietnam and local decision-makers are mostly aware of the benefits of nature-based solutions (NBS), in particular green-blue Infrastructure (GBI), for climate change adaptation. However, they requested support for further implementation to make Huế more resilient against heat waves and floods exacerbated by climate change. Therefore, in November 2022, the GreenCityLabHuế organised three events for different target groups to discuss potential scenarios of GBI development in Huế and to talk with local stakeholders about their particular needs.

At first, local stakeholders, especially from civil society and science, were invited to the Co-Design Workshop for the Green City Vision Huế. The goal was to discuss potential scenarios of GBI development in Hue modelled by the Humboldt University Berlin. These scenarios serve as examples for future urban planning and will be further elaborated in the project. 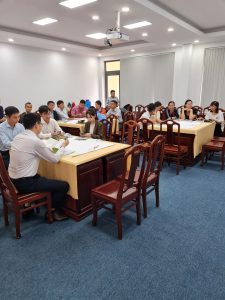 Local stakeholders were invited to the Co-Design Workshop.

During the project’s First Policy Round Table, local decision-makers and representatives from local authorities discussed the challenges of GBI planning on the regional and city-wide level. They stated that there are currently rather recommendations than legal rules for implementing GBI in Huế. Therefore, the integration of GBI in urban planning is not always guaranteed. Especially, when developing new urban areas, the integration of GBI should be considered more. The participants of the round table also asked for practical tools and methods for GBI planning, e.g. for the measurement of green spaces density in the city. Moreover, the participants advocated for promoting flood adaptation projects, because Huế is often hit by intense floods. Lastly, they underlined the importance to raise awareness of citizens and investors regarding the benefits of GBI and to motivate them to participate in their development and maintenance.

For the First GreenCityLabHuế Public Event representatives of citizen groups and the broader public were invited. During this event, representatives from four wards, including An Đông, Phú Hội, Tay Loc and Thuy Bieu presented green initiatives already in place in their respective neighbourhoods. Afterwards, the participants had the opportunity to visit the GreenCityLabHuế exhibition/display to learn more about NBS and GBI for climate change adaptation. In the final group discussions, the participants stated that they are already experiencing impacts of climate change through the variation of temperature, flooding, storms, seawater intrusion, including their impact on human health, urban infrastructure and agriculture. In addition, they requested more green spaces within the city, especially in the old city center and in less-developed or newly merged wards. The GreenCityLabHuế will integrate these inputs and concerns in future activities.

All three events took place in the rooms of the Hue University of Science (HUSC) in the last week of November 2022. They were organized jointly by the Faculty of Architecture (FoA) of the HUSC, the Mientrung institute for Scientific Research (MISR) of the Vietnam Academy of Science and Technology (VAST), the Thừa Thiên Huế Institute for Development Studies (HuếIDS), the Humboldt-University of Berlin (HUB), and the Independent Institute for Environmental Issues (UfU). 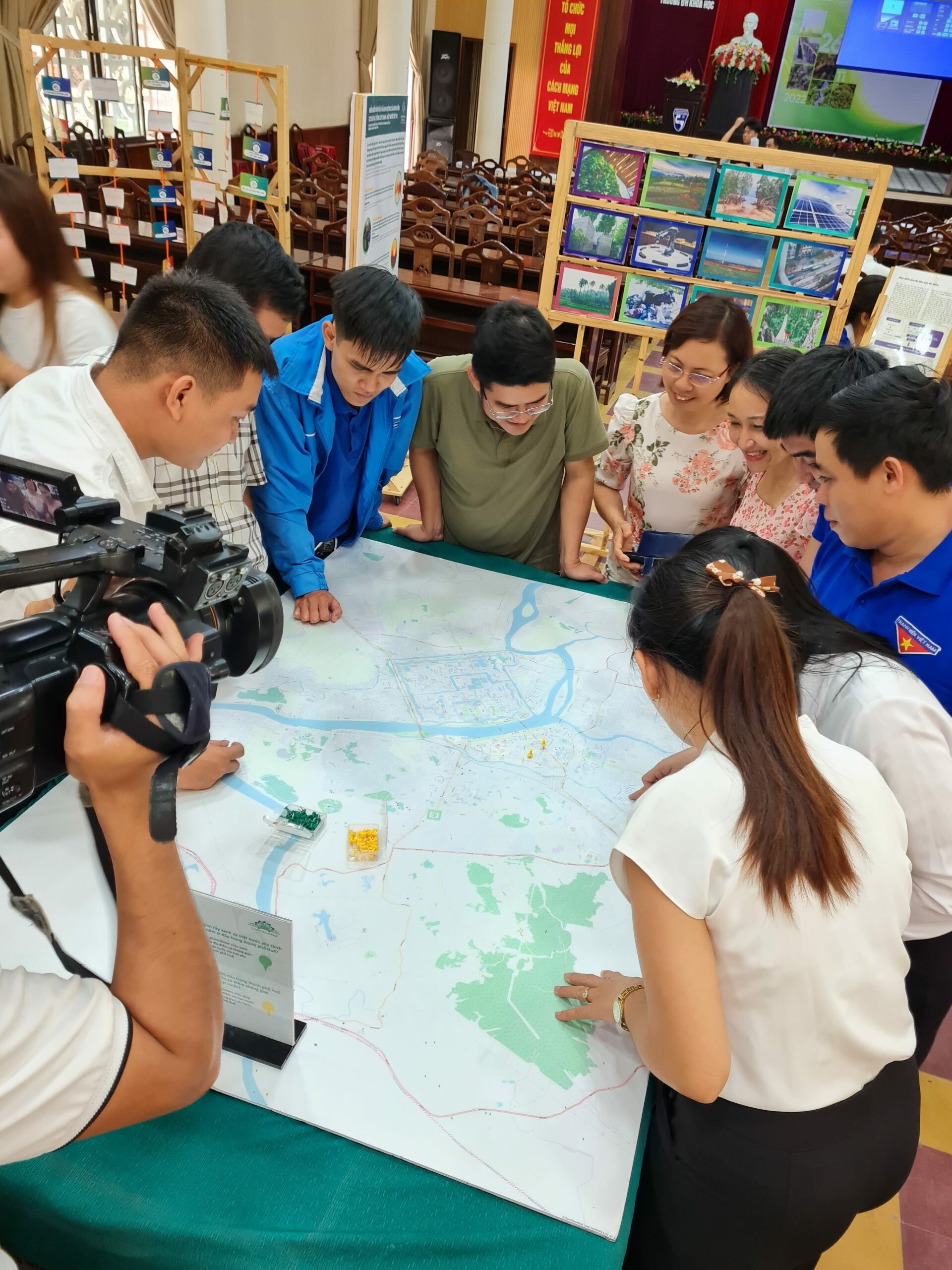 The participants of the first Public Event visited the GreenCityLabHuế exhibition/display.

In 2023, the GreenCityLabHuế will implement small-scale examples of Green-blue Infrastructure at four different sites in Huế, so-called “showcases”. For these, the project organised a Design Competition with students and further interested citizens in 2022 to find suitable designs for each showcase. The project consortium visited the sites to discuss with representatives of the respective wards and the winner teams of the Design Competition the implementation of the four designs. All sites are promising to improve the quality of life in their respective wards and will serve as good examples for future GBI development in Huế. 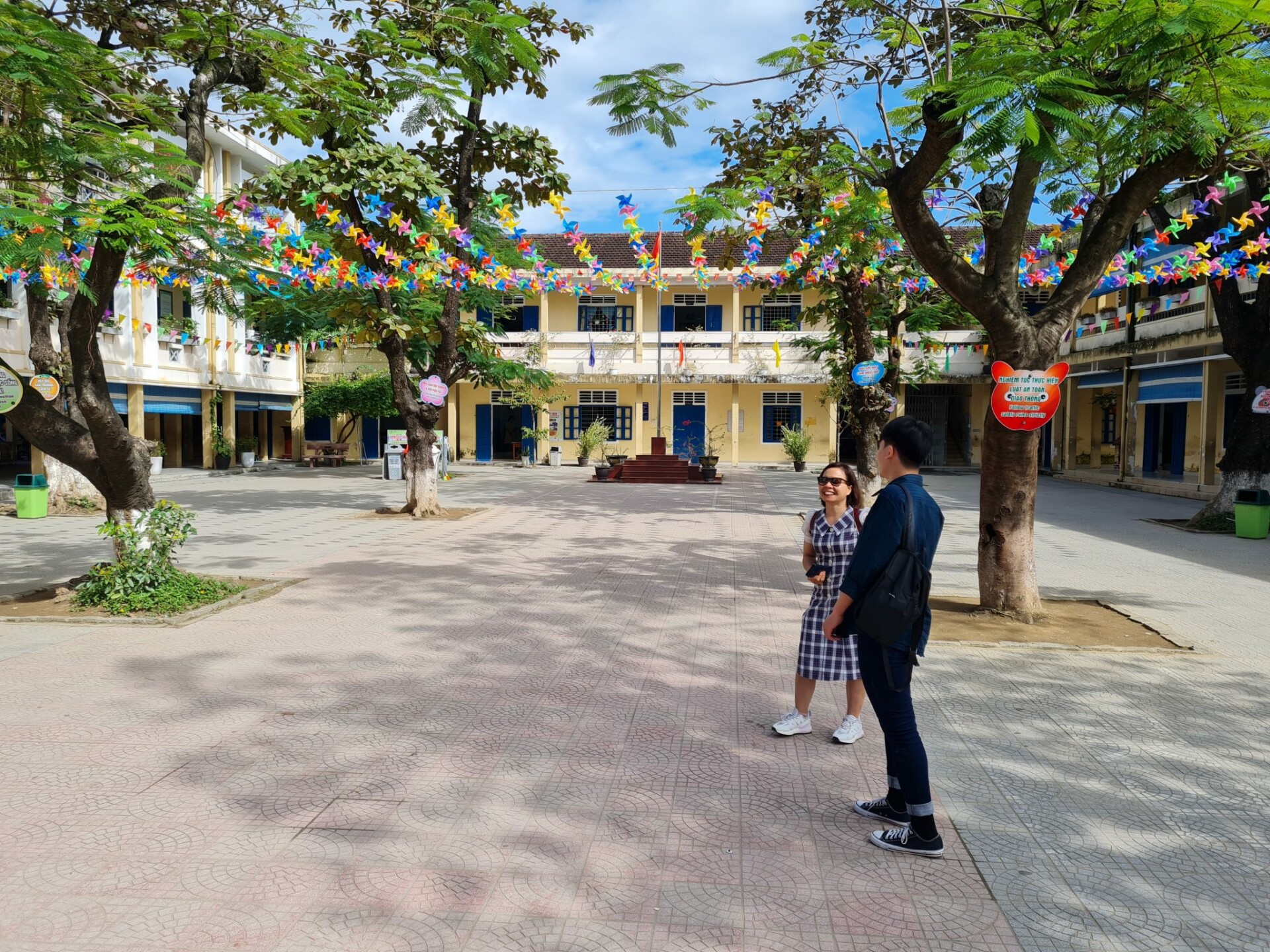 The showcase at An Dong ward.